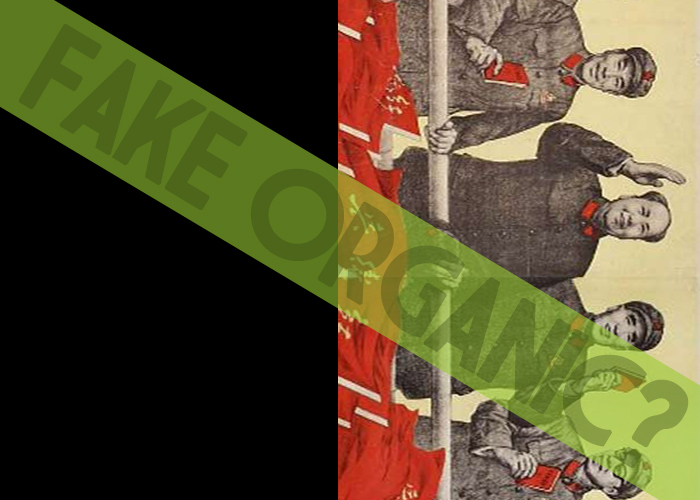 China has a reputation for producing knock-offs of luxury brands like Louis Vuitton purses and BMW cars. Add organic food and wine to the list of faux products.

In February 2011, the U.S. Department of Agriculture (USDA) released a report citing a company in southern China’s ZhongShan district for falsifying an organic food certificate and seeking to export their non-organic soybeans, buckwheat and millet as organic products. The fake certification was brought to the USDA’s attention when French organic certifying company Ecocert contacted USDA officials.

Add organic food and wine to the list of faux products.

On March 24, 2011 the USDA caught another company using a fraudulent organic certificate for brown sugar in Johannesburg, South Africa. In both incidents, the USDA found no evidence that the sugar or soybeans ever made it to market. Still, they could prompt consumers to question the validity and trustworthiness of food labels, particularly for imported organic food.

“If you’re not there watching how the food is produced and processed, there is always the unknown,” said Patty Lovera, assistant director of Food and Water Watch, a non-profit consumer advocacy organization. “We push for high standards for organics, but to make it meaningful, we need systems of enforcement.”

To police organic standards internationally, the USDA depends on accredited agents to enforce organic certificates. The USDA relies on 94 agents worldwide to certify organic food for import to the United States. Those 94 organic certifying agents are responsible for monitoring some 20,000 companies that want to sell organic products.  “The USDA is working hard with the certifiers to collaborate so they can be the eyes and ears on cases like this,” said Soo Kim, a spokesperson for the USDA.

Those 94 organic certifying agents are responsible for monitoring some 20,000 companies that want to sell organic products.

The U.S. increasingly relies on China as a source for food products. In 2008, the U.S. imported some $5.2 billion worth of seafood and agricultural products from China compared to $800 million in 1995 according to the USDA. The USDA estimates that 60 percent of apple juice consumed in the U.S. is imported from China. Other major Chinese imports include garlic, instant coffee, dried and canned vegetables and fruit.

In 2008, Chinese manufacturers added melamine chemicals to milk products, including infant formula, so that their products could appear to have high levels of protein in laboratory tests. Six babies died and hundreds of thousands of people were exposed to the contaminated milk.

These latest bogus organic labeling scams have prompted some local food advocates in the U.S. to take a hard line against imported foods. Mark Kastel, co-founder of The Cornucopia Institute, a non-profit supporting small-scale ecological farming, believes that importing food from China and elsewhere violates the spirit of sustainability, which he defines as minimizing the distance between consumers and producers, and assuring transparency in how food is grown. Organic consumers “want to pay more and so they know more,” said Kastel. For consumers, paying a premium for organic food makes less sense when food importers are found to be falsifying organic certification.