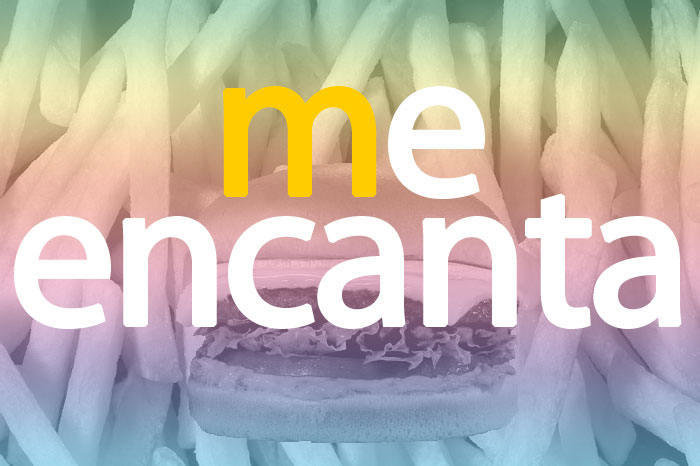 “When he watches a McDonald’s commercial, he tells me, ‘take me to McDonald’s,’” said the boy’s mother, Sandra Guerra, 38. The stay-at-home mom keeps a bowl of fruit where Giovany can reach when he gets cravings while watching “Pinky Dinky Doo,” a Spanish language television show on Univision. But she says her round-cheeked son does not want fruit. He wants cold cereal and hamburgers.

In other words, he wants the food he sees in the television commercials.

“He asks me for everything he sees,” Guerra said. She believes television commercials are fueling his appetite for unhealthy foods.

Latino preschoolers like Giovany see 20 percent more ads for fast food and 20 percent fewer ads for fruits and vegetables than non-Latino preschoolers, according to research done at Yale University’s Rudd Center for Food Policy and Obesity. Children’s advocates worry that exposure to unhealthy foods, such as sugary cold cereals, sodas and fast foods, are contributing to childhood obesity, particularly among Latino children. 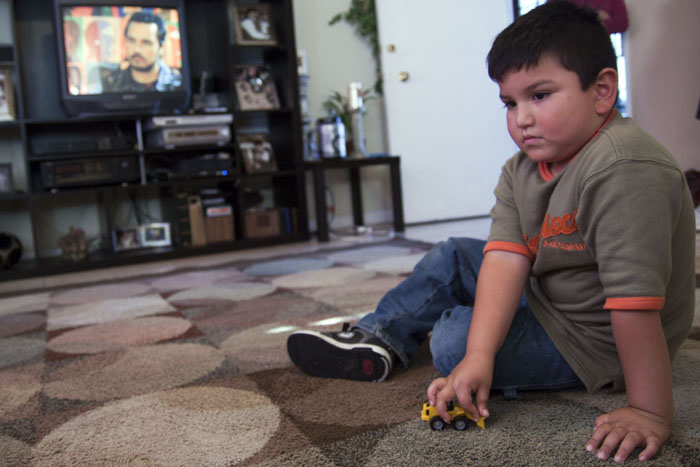 Giovany Guerra, 5, plays with his toy truck in his living room. His mother says he constantly asks her for unhealthy food he sees on television. (The Ration/ Felix Irmer)

“The food ads that appear on Spanish-language children’s programming are much more likely to be for poor nutritional quality foods,” said Dale Kunkel, a professor at the University of Arizona, whose research suggests that more than 80 percent of the ads Latino children see in Spanish are for “unhealthy” food.

Meanwhile some 17 percent of all children and adolescents in the U.S. are now obese—triple the rate of that from a generation ago. Obesity rates in Latino children are even higher. Twenty seven percent of adolescent Mexican-American boys are obese, close to double the rate of Caucasian boys, according to the Center for Disease Control and Prevention.

This trend concerns researchers, but it also concerns mothers like Guerra. She tries to feed her son fresh vegetables, and limits the amount of hours her son can watch television. “I know he’s gaining weight,” she said in Spanish. The family’s pediatrician has already enrolled Guerra’s two older children, ages 12 and 17, in a weight loss and nutrition program for obese and overweight youth, and Guerra does not want to see her youngest son follow his siblings’ weight gain. There are many causes for rising obesity rates in children, but researchers are beginning to look more closely at the link between what foods kids see on television, what foods they crave, and how that relates to their growing waistlines. A child typically sees 1,500 ads per year for fast food and full-service restaurants, and about 80 ads for fresh fruits and vegetables, according to Yale’s Rudd Center.

A child typically sees 1,500 ads per year for fast food and full-service restaurants, and about 80 ads for fresh fruits and vegetables.

A group of elementary school children shown 100 television ads for soft drinks by Yale researchers consumed nearly 10 percent more of them, including sodas, sports drinks, and sweet drinks that don’t contain 100 percent real fruit juice like Kool-Aid than children who had not watched the ads.

“We know that children, after watching food advertising, request specific food,” said Darcy Thompson, a pediatrician at Johns Hopkins Children’s Center. “They can nag their parents for those foods and perhaps convince those parents they should go out and buy that specific type of food.”

There is mounting evidence that children are particularly susceptible to advertising. A 2001 Stanford University study of low-income preschoolers in Northern California showed that ads are so effective that even a single exposure to an advertisement can have an impact on a child’s brand preference. Stanford researchers also found that children between 2 and 6 years old recognized brand names, packaging, logos and characters associated with food products, and that some children preferred the taste of foods — including milk, apple juice and carrots — if they believed the food was from McDonald’s.

That companies are paying more attention to the Latino market is no surprise. There are now an estimated 48 million Latinos living in the U.S. with buying power estimated to reach $1.3 trillion by 2015, according to an industry report by Packaged Facts, a market-research company.

General Mills — producers of such cereals as Trix, Lucky Charms and Cinnamon Toast Crunch — spent $72 million on advertising on Hispanic media in 2009, up from up from $42 million in 2008, according to data from Association of Hispanic Advertising Agencies.

“Marketers like to talk about the Hispanic market as a huge opportunity for them to grow their business, and that’s not a bad thing normally,” said Jennifer Harris, the director of marketing initiatives at Yale’s Rudd Center. “But when they’re growing their business by selling products that are damaging to people’s health, that’s a problem.”

Federal regulators have tried to crack down on advertising junk food to children. In 2009, Congress directed four federal agencies to establish an Interagency Working Group on Food Marketing to Children to create a set of guidelines to quell unhealthy food advertising to children. Earlier this year, the Interagency came out with preliminary guidelines that called for less sodium and sugar on foods marketed to kids.

But the guidelines allow food companies to regulate themselves, and that has sparked criticism. “There’s no one way the companies define what qualifies as healthy food,” Kunkel said.

In 2006, more than a dozen of the largest food and beverage food companies entered a voluntary agreement to market only healthful food to children. The so-called Children’s Food and Beverage Advertising Initiative issued guidelines in July suggesting that companies must lower levels of sodium, saturated fats and calories, or else they will not be able to advertise to children after December 2013.

Still, Latino advocates are concerned. In July, the Mexican American Legal Defense and Educational Fund, or MALDEF, held a webinar with some of the key health advocates and food marketing researchers to strategize how best to publicize the effects of advertising junk food to Latino children.

“Marketing to kids doesn’t just happen on television,” said Claudine Karasik, a consultant for the child obesity project with MALDEF. “It happens when companies market their products in print, on the Internet with prizes and contests, and through the use of licensed characters.”

And Guerra sees the link between the ads she sees during her son’s programming and what brands he recognizes and craves. When she takes her son to the grocery store, he always goes straight to the cereal aisle to grab a box of chocolate Rice Krispies. “Whenever we’re at the store,” Guerra said, “he wants me to buy it for him.”