In July, the Codex Alimentarius Commission, the international body that sets food safety standards, ruled that governments are free to label foods derived from modern biotechnology. The decision means that any country can now require mandatory labeling of foods containing genetically modified organisms, or GMOs, without facing the threat of legal challenges by other nations.

While many Americans may have never heard of the Codex Alimentarius Commission, polls suggest that a majority of U.S. citizens agree that genetically modified foods should be labeled. In a poll by the Pew Research Center, 55 percent of Americans say that genetically modified foods are “bad.” Polling firm Harris Interactive found that 86 percent of Americans think the government should require GMO labeling. A Consumers Union poll had similar findings.

The U.S. does not require foods containing GMOs to be labeled. By July, the Obama Administration had approved genetically modified alfalfa, corn for ethanol, sugar beets and a variety of grass called Kentucky bluegrass. The U.S. Food and Drug Administration is also considering the approval of genetically engineered salmon.

Despite assurances by federal regulators that there is no “significant material difference” between GMOs and their natural counterparts, consumer groups are pushing for mandatory labeling of genetically modified foods. They say consumers want GMO labels and that a piecemeal, voluntary labeling policy could result in the same consumer backlash and protracted legal battles that occurred after 1994. That year, the Food and Drug Administration allowed dairy cows to be treated with artificial growth hormones. Use of the hormone, recombinant bovine growth hormone, or rBGH, which is also known as recombinant bovine somatotropin, or rBST, boosted milk production by up to 10 percent. 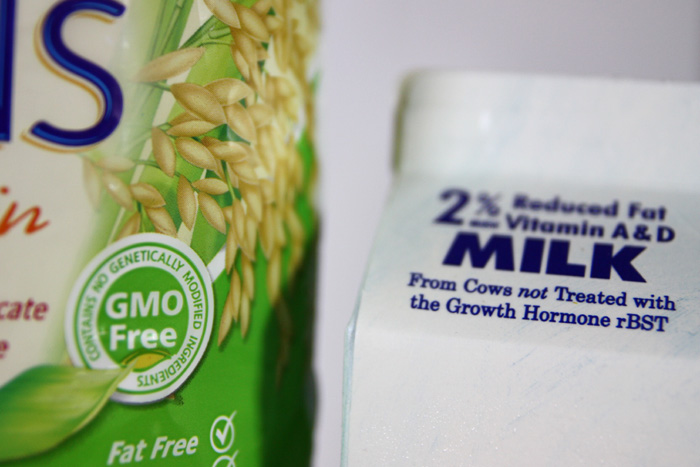 Voluntary food labels for GMOs and milk from cows not treated with growth hormones. Producers use them as the Food and Drug Administration does not require mandatory labeling in both cases. THE RATION/Felix Irmer

“The FDA made a decision that the milk is the same from a cow that did not get rBGH and a cow that did get rBGH. We disagree with that,“ said Patty Lovera, assistant director of Food and Water Watch, a non-profit group that advocates against GMOs. “Whether it is cloned animals, or genetically engineered crops, or genetically engineered salmon, they are making the same noises about not labeling it, and we think that this is the wrong policy.”

When federal regulators approved rBGH and rBST, the FDA concluded that there was “no significant difference between milk from treated and untreated cows,“ and did not require the milk to be labeled. Instead, federal regulators issued a voluntary labeling guidance recommending that if companies wanted to add statements like “milk not from cows treated with rBGH/rBST,” they should consider adding the line, “no significant difference has been shown between milk derived from rbST-treated and non-rbST-treated cows.’”

The milk labels were popular with consumers. A 2008 Consumers Union poll found that 93 percent of consumers thought dairies that did not use artificial growth hormones should be allowed to label their products as being free of the hormones. That popularity put pressure on retailers. In 2007, major milk purchasers such as WalMart, Safeway and Starbucks decided not to carry milk from rBGH-treated cows. Creameries started pressuring dairy farmers to stop using rBGH. Use of the hormones fell. In 2010, only 33 of the largest 100 dairies in the U.S. used the hormone, according to the non-profit Oregon Physicians for Social Responsibility.

Legislators in several states introduced bills and regulations restricting the labels. In 2008, agricultural officials in Ohio adopted a regulation that severely restricted the labels. But, in October 2010, the Sixth Circuit Court of Appeals overturned Ohio’s labeling restrictions. The court ruled that, “a compositional difference does exist between milk from untreated cows and conventional milk.” Milk produced from cows treated with the hormone had lower nutritional quality and increased somatic cell counts, an “indicator of poor milk quality,” according to the ruling. That decision seemed to contradict the Food and Drug Administration’s original finding that there was “no significant difference between milk from treated and untreated cows.“

Agency officials said they were still considering the court’s ruling and as of July, had no comment.

Consumer advocates and anti-GMO activists have used the court’s ruling to try to put pressure on federal regulators to require labeling of foods containing GMOs. “Since the win in Ohio, there has been a lot of mobilization,” said Michael K. Hansen, a senior staff scientist at the Consumers Union. “The FDA says, ‘we’re not requiring labeling for GMOs because there isn’t a real difference.’ That’s the argument being used, but it’s not true.”

Industry groups disagree. “FDA has the scientific and nutrition expertise to establish food labeling and to assess food safety,” Ab Basu, the Biotechnology Industry Organization’s acting executive vice president for food and agriculture told the Chicago Tribune in May. “You can look at the FDA website and see that if the corn is substantially equivalent to corn produced conventionally, there is no reason to label it as being any different.” 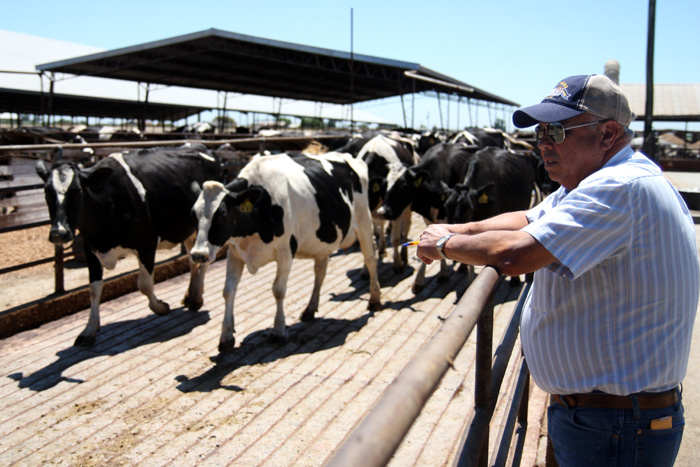 Dairy farmer Ray Souza observes some of his cows on his farm in Turlock, California, July 25, 2011. Souza stopped treating his 900 cows with rBGH in 2007 due to economic reasons. THE RATION/Felix Irmer

Even without mandatory labeling of GMOs, consumer groups say that the rBGH labeling experience proves that consumers want to know what is in their food, and even voluntary labels are enough to shift the market, as in the case of rBGH-free milk. “Labeling tends to happen one way or another,“ said Hansen.

Food labels influence what consumers buy in the grocery store. That, in turn, affects food producers and dairy farmers like Ray Souza, who produces 2.5 million gallons of milk per year in Turlock, a small city in California’s agriculturally rich Central Valley. In 2007, he stopped treating his 900 cows with rBGH despite enjoying the increased milk production that resulted from the hormone. His choice was economic, not political. The creamery that bought his milk decided to segregate milk from cows that had been treated with rBGH. Keeping his cows on the hormones would have meant a substantial increase in the cost of getting his milk to market.