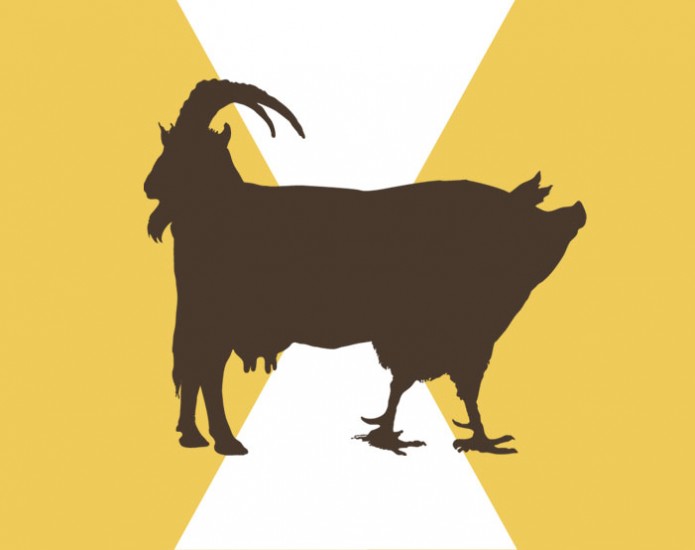 Wylie Dufrense went to Harvard to talk about meat glue.

“We’ve often been accused of things like playing God,” said the bespectacled chef and food scientist to a room packed with eager students. Behind him, a bonded block of chicken consommé jiggled.

Meat glue is made of enzymes called transglutaminases, which bond protein molecules together. Once considered a crude tool for food manufacturers, the epoxy has recently caught on with haute cuisine chefs like Dufresne who use it to fuse bacon to cod medallions, say, or to de-bone and restructure lamb. The strange and intricate multispecies meat sculptures made possible with the adhesive make the once-outrageous turducken look rudimentary and unimaginative.

Once considered a crude tool for food manufacturers, meat glue has recently caught on with haute cuisine chefs.

Often credited with bringing the powdery white enzyme to American cuisine, Dufresne, who owns the edgy New York restaurant wd~50, says some 40% of high-end chefs now use the stuff.

In the United States, meat glue is most commonly sold under the label Activa TG, which is manufactured and marketed by the Japanese food and pharmaceutical giant Ajinomoto. The company, whose name translates as “the essence of taste,” also credits itself with the discovery of umami — a taste described most simply as savory — and is the world’s largest manufacturer of monosodium glutamate, or MSG. Ajinomoto operates in over 23 nations worldwide, where it widely markets several versions of the meat glue, each one modified for a specific type of flesh or protein, including fish, red meat, and even dairy.

Long used in cheap, reconstituted meat products like chicken nuggets, the enzyme first showed up on a swanky menu in 2004 when chef Heston Blumenthal made a “mackerel invertebrate” by de-boning a fish and gluing it back together. Blumenthal owns the Fat Duck in Bray, Berkshire, England, which some critics consider the best restaurant in the world. Since then, the binding agent has been championed by other chefs attracted to such gastronomic trickery, like Dufresne, and Grant Achatz at Chicago’s restaurant Alinea, who was once called the “love child of Julia Child and Einstein.”

Long used in cheap, reconstituted meat products like chicken nuggets, the enzyme first showed up on a swanky menu in 2004 when chef Heston Blumenthal made a “mackerel invertebrate” by de-boning a fish and gluing it back together.

Meat glue is now so popular that Ajinomoto is considering offering smaller-sized, more consumer-friendly packaging for home cooks. While Ajinomoto declined a request to release specific sales figures for meat glue, the company did acknowledge a rapid uptick in sales. “The business is increasing every year significantly,” said Guy Tinay, Ajinomoto’s account executive for Canada and much of the United States.

Although meat glue has been a common ingredient in deli meat, Asian fish cakes, and imitation crab, the chef’s talk, and the students’ enthusiasm, signal that meat glue is going upscale and mainstream. Anyone who has recently ventured into the fine-dining circles of San Francisco, New York, or London has probably eaten it.

Originally made from cow, pork, or even guinea pig blood, the glue is not without its critics. In May 2010, a blood-based form of the enzyme, called thrombin, was outlawed in the European Union. Ajinomoto’s glue is made from fermenting enzymes found in soil and is vegetarian until it comes in contact with animal protein. European lawmakers and skeptics have lobbied against even the vegetarian version, arguing that meat glue means more handling, and thus more potential for contamination by food-borne pathogens like E. coli.

“It’s dangerous to think about meat glue as a way to save money, cobbling together extra pieces to make something else,” said Dave Arnold, who teaches food science at the French Culinary Institute in New York and runs the food technology blog “Cooking Issues.” The trial lawyer Bill Marler, who has represented food-borne illness victims since the Jack in the Box E. coli O157:H7 outbreak in 1993, said that gluing pieces of meat together could increase the chances for adulterants to find their way into food.

Some 48 million people are sickened and more than 3,000 die each year from food-borne illnesses in the United States alone, according to the Centers for Disease Control and Prevention. Still, the United States Department of Agriculture has yet to place any restrictions on the glue and considers it “generally recognized as safe.”

Meat glue fans feel it is a crucial tool for expanding the repertoire of experimental chefs. “Kitchen cleanliness is not the ingredient’s fault; that’s up to the chef,” said Dufresne. “People have been manipulating food ever since they realized cooking a whole animal was difficult. Cows don’t come in hot dog form.”

Dufresne has concocted all manner of playful and bizarre food products with meat glue, including shrimp spaghetti, which he made by mixing salt, cayenne, deveined shrimp, and meat glue in a blender. Next, he pushed the slurry through a fine sieve to mimic the smooth, bouncy texture of pasta dough. Dufresne added shrimp oil before forcing the shrimp goo through a Japanese noodle maker into 131-degree water. More recently, Dufresne’s wd~50 served up flap steak adhered into flawless cubes. On another occasion, casingless rabbit kidney sausages, made by mixing traditional sausage ingredients with glue, were served. Other applications are even more innovative, like impregnating fruits and vegetables with gelatin before fusing them with Activa TG. Meat glue is a basic building material for those chefs who want to defy conventional anatomy and forego the confines of nature. “Most people are just starting with this stuff,” said Dufresne.

Despite recent news articles with headlines like “Meat Glue: The Meat Industry’s Dirty Secret,” more people than ever before are using the adhesive.

Despite recent news articles with headlines like “Meat Glue: The Meat Industry’s Dirty Secret,” more people than ever before are using the adhesive. Companies and private inventors are applying for patents containing transglutaminase, including ones for “Shaped cheese reconstruction” and “Process for producing nugget food.” Chefs are devoting chapters of cookbooks to glue.

Take Ideas in Food, the debut cookbook of Levittown, Pennsylvania-based food bloggers and chef-consultants Aki Kamozawa and Alexander Talbot, who were introduced to meat glue by Dufresne. The couple spends a full 10 pages on glue, with recipes for Shrimp Mosaic, Goat Cheese Dumplings, and Turkey Thigh Roulade. “Transglutaminase,” they write, “is a tool for efficiency and creativity.” In a phone interview, Talbot likened meat glue to other ingredients re-popularized in recent years by chefs. “Fifteen years ago, you didn’t see arugula; now it’s everywhere,” he said.

Back at Harvard, Dufresne encouraged students to experiment and bend the boundaries of food and form. “Lobster to a chicken? No problem,” he said. “Go for it, man ­— whatever you want to glue, glue!”