Organizers divided cooks and activists into teams so that at every hour of the day, someone was baking, roasting, chopping, and presenting a decadent meal. There was the perfectly roasted pig, the exotically spiced cinnamon rolls, sliced halibut sashimi, Meyer lemon ricotta blintzes, and plump Gulf shrimp floating comfortably in a sea of andouille sausages, cayenne, thyme and black pepper.

The schedule was loose and included sunrise yoga, how-to tutorials on pig butchering, and a yogurt-making workshop with science writer Harold McGee. There were no PowerPoint presentations, talking points or breakout groups. The point was mostly just to eat, cook together and talk together. The conversations I heard covered everything from probiotics to stool transplants, from “the magic of salt” to the age-old question, “Why doesn’t everything taste like bacon?”

“These are my people,” said one grinning guest, looking down at her loaded plate. 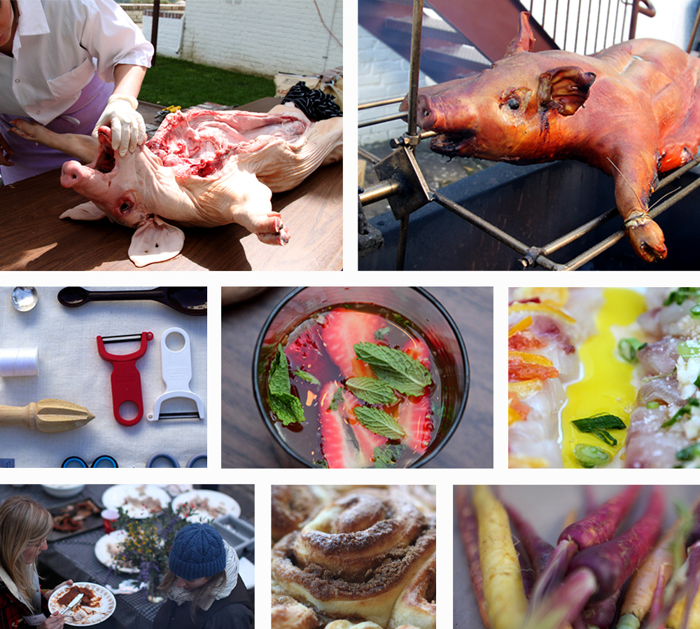 Most participants got a few minutes to describe their crafts. The food bloggers blogged. Everyone took photos with their iPhones.

Alex Roth a coffee entrepreneur from Davis, Calif., who roasts coffee by peddling his bike to turn a giant tumbler suspended over a propane flame, described the intricacies of coffee terroir and the abusiveness of your average industrial dark roast. “They just burn the shit out of it,” he said.

Food stylist Tina Stamos who came from Dallas, painted multicolored carrots with oil and misted water. “I use Vaseline to repair pie crusts,” she said. To make raw chickens or turkeys look perfectly browned for magazine spreads and cook book covers, she uses Kitchen Bouquet, a browning and seasoning sauce last popular in the 1960s. “Sometimes I’ll plump the bird in a hot oven first, but it’s definitely raw.”

In the ranch’s upstairs kitchen, Dafna Kory, a Berkeley-based jam maker with a company called INNA Jam (In-a-Jam, get it?) explained the science of pectin.

The event turned out to be more food and less revolution. Around the bonfire on Saturday night, Miner, one of the retreat’s founders, suggested that maybe the next Eat Retreat should be for people who don’t know how to cook, something like a food camp taught by local chefs to local people.

That same night, during breaks in the singalong, attendees were asked to go around the circle and state their food philosophies.

“If you know how to cook anything, teach someone who doesn’t,” said Mike Rakotz, a doctor and vice chair for quality of the University of Chicago’s department of family medicine. “Good food is the best medicine.”

“What goes in, must come out,” said Danny Chaves, who played bass and banjo in the band. (What band? The band playing at the bonfire?)

When it was her turn to speak, Kathryn Tomajan, an event co-founder, clutched her Red Breast whiskey and asked, “How do we preach to people who aren’t the choir?”