The European Union (EU) made a substantial step toward establishing a binding food labeling policy for its member states. According to an agreement reached by negotiators yesterday, all food products in the EU will be required within five years to display their energy, salt, sugar, protein, carbohydrate, fat, and saturated fat content. Once finalized, the food label policy would conclude a debate over the redesign of the European food label that started in 2008.

In the U.S., a comparable debate is about to take place. The Department of Agriculture recently released the “MyPlate” image as a replacement of the decades old food pyramid and the Food and Drug Administration is currently considering a redesign of the Nutritional Facts label, which lists values for calories, fats, sugars and other nutrients. While Americans negotiate which label might most effectively communicate nutritional values to consumers, it is worth looking to the experience of the EU.

Initially, lawmakers in Europe wanted to require a mandatory front-of-package labels and discussed requiring food companies to list Guideline Daily Amounts (GDA) of calories, sugars, fat, saturates, and salt in a serving of food. The deal reached Wednesday does not require that labels be on the front of packages or that they include the GDA figures. 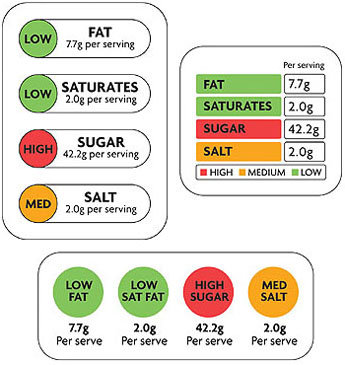 A "traffic light" food label as currently used in the United Kingdom. By using the colors red, yellow, and green, the label indicates whether a food product contains high, medium or a low amounts of fats, saturated fats, sugar, and salt. Picture by UK Department of Health.

One nutrition label design that proved particularly popular among European consumers (and controversial among industry groups and law makers) was the “traffic light label” that uses the colors red, yellow, and green to indicate whether a food product contains high, medium or a low amounts of fats, saturated fats, sugar, and salt.

“It is absolutely essential that it is simple, that you don’t need to sit down and start trying to work out what that percentage means,“ Dr. Vivienne Nathanson, head of science and ethics at the British Medical Association, told the BBC in 2010. “And the traffic lights system is something you can even see from a distance, so you can start to hone in on the foods that are predominantly green or green and amber and just cut down on the foods that are marked red.“

The traffic light label is already used on a voluntarily basis by a number of British food chains and manufacturers. It is supposed to help consumers compare products and make choices quickly when buying food.

In the European relabeling debate last year, the traffic light label received widespread support from the public and consumer protection groups. In one poll, 69 percent of the Germans favored the traffic light label. Also, separate studies of an Australian group of researchers and the UK consumer’s association found that the traffic light system was the most effective in assisting consumers to identify healthier foods.

Despite its popular support, EU lawmakers chose not to go with the traffic light label, deciding instead on the optional inclusion of a label that looks similar to the one recently proposed by the U.S. by the Grocery Manufacturers Association and the Food Marketing Institute.

In Europe, the food industry groups criticized the traffic light label, saying it patronized consumers and that consumers who strictly adhered to the green lights would not be able to eat a healthy diet.  The non-profit research and campaign group Corporate Europe Observatory estimated that the Confederation of the Food and Drink Industries and its companies spent $1.45 trillion in order to assure the traffic light label was not chosen by lawmakers.

A voluntary front of the pack nutrition label recently launched in the USA. Introduced by the Grocery Manufacturers Association and the Food Marketing Institute, it indicates calories, saturated fat, sodium, total sugar and up to two other nutrients. Picture by GMA

“Coke Light is made with sweeteners instead of sugar, it would get a green light for sugar because it contains none, while natural fruit juice with no added sugar would get a red light because of its natural sugar content,” said Sommer. Also, one would create an incentive for the producers to substitute sugar with starch or sweeteners and salt with sodium glutamines in order to get more green lights.

In the U.S., there is a nation-wide design initiative to redesign the nutrition label that’s independent of the government and the food industry. Rethink the Food Label, a design challenge hosted by UC Berkeley Graduate School of Journalism’s News21 and Good magazine online is asking the public, graphic designers, and nutritionists to picture a revamped nutrition facts label.

Contributors are asked to incorporate the nutrition label’s existing break down of fats, sugar, vitamins, calorie count, and percent daily values; or completely re-imagine the label to include geography, food quality, food justice, added sugars or carbon footprint. The top designs will be judged by a panel of food thinkers and graphic designers that includes Michael Pollan, Robert Lustig, Andrew Vande Moere, and Laura Brunow Miner.