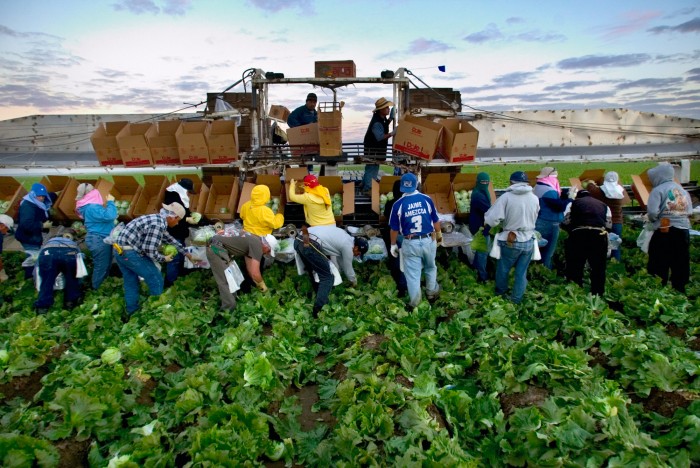 A young female farm worker picking fruit in Washington’s Yakima Valley came to see Dr. Matthew Keifer after pesticides being sprayed in an adjacent orchard wafted onto her. She arrived with red, swollen eyes and itchy, irritated skin — classic symptoms of exposure to Paraquat, a common weedkiller that can cause kidney, heart, and liver problems.

Keifer suspected the Paraquat had made her sick, but proving those suspicions was impossible: For many pesticides, no tests exist that would show, definitively, whether or not a person been has exposed to the chemical. Had a test existed, Keifer’s patient would have been able to to file a workers compensation claim that, if successful, would have covered the costs of her medical care and given her paid time off while she recovered. Instead, she went without.

“If a person’s illness is judged to be work-related, they enter into a care system with excellent financial support and have access to referrals,” Keifer says. “If not, they’ll be stuck out there in limbo, usually without care.”

Without working diagnostic tools, doctors are left to make educated guesses about their patients’ health by piecing together information about their work conditions and symptoms — a situation that can lead to missed or even wrong diagnoses.

Proponents of the idea say it could help safeguard the health of some of the most vulnerable people in society — farm workers. And it would also let policymakers better understand pesticides’ true impact on public health: It’s hard to effectively regulate a chemical if those in charged with doing so don’t know who’s being exposed or whether existing safety protocols work.

The idea is gaining traction in public health circles. In November, the American Public Health Association passed a resolution urging the EPA to require pesticide manufacturers to develop methods for detecting human exposure to their chemicals. The resolution was authored by Keifer, who serves on the EPA’s Pesticide Program Dialogue Committee, and Liebman. The EPA will hold hearings on biomarkers and other diagnostic tools in October.

Pesticide exposure is a real risk for farm workers and people living in farm towns where pesticides are routinely sprayed on nearby fields from helicopters, small planes, trucks, and backpack sprayers or injected into the soil. Exposure to many of the chemicals used in industrial agriculture, like methyl iodide (which is applied to strawberry fields), is linked to cancer, miscarriage, thyroid disease, and many other life-threatening maladies.

“Exposure is extremely likely, yet we don’t require the chemical companies to provide the tools to diagnose what is almost inevitable: illness,” Keifer says. “This is information that we the public should be entitled to have. What are the long-term health effects of the chemicals [these] companies are putting into the environment?”

Chemicals that wreak such precise havoc on insect bodies inevitably get into human bodies, too.

Chemicals that wreak such precise havoc on insect bodies inevitably get into human bodies, too.

“Given the fact that that these chemicals are meant to hurt organisms, and that we both share physical processes with these organisms and share an environment with them, it would make sense that we would have a way of diagnosing poisoning with those chemicals,” says Keifer, who left Washington to head the National Farm Medicine Center in Wisconsin last year.

While it is difficult to prove that exposure to a certain chemical causes a certain illness, measuring the presence of a chemical in a person’s body — a process called biomonitoring — is an important step toward understanding the health effects of pesticides, protecting workers from overexposure and helping poisoned workers seek treatment and workers compensation, when possible.

To perform biomonitoring, researchers look for signs that signal a chemical’s presence in the body, called biomarkers. Biomarkers can take various forms — exposure to some chemicals can be tracked by looking for changes in DNA or in the production of certain enzymes. Traces of the original chemical or its metabolites — the byproducts created when it is broken down by the body — can often be measured in body fluids like blood, breast milk, and urine. Unlike environmental monitoring, which measures the amount of a toxic substance in the air, water or soil, and can be used to estimate the degree to which humans are also being exposed, biomonitoring is a more precise way to measure the amount of a chemical a person actually takes into his or her body.

Biomonitoring isn’t alien to watchdog agencies; Washington and California mandate the biomonitoring of farm workers who apply organophosphates to strawberries, broccoli, lettuce, and other crops. Organophosphates have been linked to ADHD, reproductive health problems and cancer, and the data has been used to remove workers from potential overexposure and evaluate workplace safety practices.

But the EPA has about 19,000 pesticide products with more than 1,000 active ingredients in its registry. Developing biomarkers for each one is a task research chemist Dana Barr, an Emory University professor who spent more than 20 years at the Centers for Disease control developing tools to detect exposure to chemicals, calls “daunting.”

One of the biggest challenges is figuring out the metabolite for each chemical — a key step in developing many biomonitoring tools. Researchers often resort to trying to predict which chemicals will be on the market and what their metabolites might be, but the process can involve a lot of trial and error, says Barr.

Asking chemical companies to provide that information would make it simpler and less expensive to develop biomonitoring tools, Barr says. “I think they know a lot more about they chemicals they manufacture than we know,” says Barr. “I’m not saying they’re purposefully withholding that information; I just don’t think they’ve been asked for it.”

“I think they know a lot more about they chemicals they manufacture than we know,” says Barr. “I’m not saying they’re purposefully withholding that information; I just don’t think they’ve been asked for it.”

Bruce Hammock, an entomologist who’s spent 26 years developing biomonitoring tools at the University of California, Davis, agrees that requiring pesticide companies to provide this sort of information would streamline his work. His researchers usually go through the sometimes-arduous task of isolating biomarkers for certain chemicals because companies were not willing to release that information.

“In some cases you can guess [the biomarkers] pretty well,” he says, “but other times you’d be surprised.”

The EPA’s rules already require pesticide manufacturers to submit extensive information about their products, including their effects in laboratory animals.

Everyone interviewed for this story, including Thomas Helscher, Monsanto’s director for corporate affairs, agrees that chemical companies already possess much of the information they would need to develop a biomarker for their products. Monsanto makes the weed-killer Roundup, which is widely used in soy farming (not to mention home gardening). Long term exposure to high levels of its active ingredient, glyphosate, could cause reproductive health problems and kidney damage, according to the EPA. A 2010 study linked low doses of the chemical to birth defects in animals.

Helscher said creating tools to detect his company’s chemicals in the human body would be “feasible” in most cases. Still, he cautioned that biomarkers may not always be helpful in detecting agricultural chemicals that pass quickly through the body. “Whether the data from such an assay will be useful will depend on the specific chemical or metabolite,” Helscher says.

Helscher also said Monsanto has cooperated with researchers who were developing biomonitoring tools for some of his company’s products. Still, he cautioned that while biomonitoring can measure exposure to a chemical, it does not diagnose disease.

But even if tests are developed for each chemical available, performing them could still be cost-prohibitive, Barr says. “There are lots of tests that exist, but very few labs have the capacity for testing a broad range of pesticides,” she says.

Still, Hammock, the UC Davis entomologist, says it’s often not necessary to do expensive tests for a broad range of pesticides — just the ones that are being sprayed on the crop at any given time. Researchers are close to developing a dipstick urine test for pesticides that would be similar to a pregnancy test and allow workers to see almost instantaneously whether they’d been exposed to a handful of common pesticides.

Hammock sees potential for cheap, quick tests like these to be used to demonstrate the value of using safety equipment and following safety protocols.

He worked with a group of men who were spraying pesticides in highway median strips in California. The group tested their urine and found that while all showed signs of exposure, two of the men’s blood samples showed pesticide metabolite levels 1000 times higher than the rest of the crew’s. When Hammock went to talk to the men, he realized they’d done reckless things — one accidentally sprayed his car with pesticides, wiped the windshield off with his hand, and then ate a sandwich. The other blew out the nozzle of the applicator with his mouth.

Keifer, a driving force behind October’s EPA meeting on biomarkers, says asking the EPA to use its authority to better protect farm workers who are largely Latino and low-income is largely an issue of environmental and economic justice.

“Who gets poisoned by pesticides? It’s not the guys who run insurance companies, and it’s not senators,” says Keifer. “It’s poor working guys and women in the field and they are disproportionately affected by the lack of tools to diagnose pesticide poisoning.”