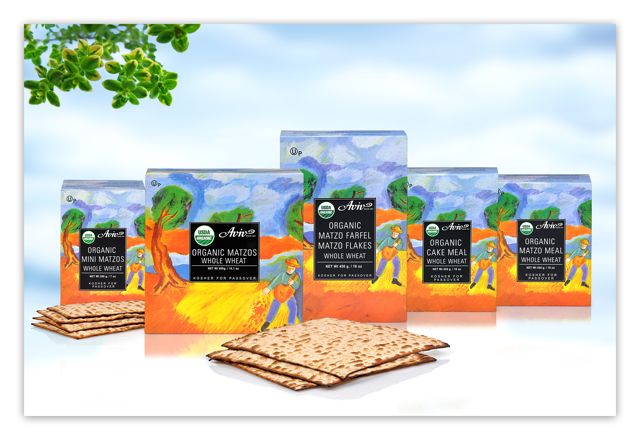 On Passover Jewish people around the world re-tell the story of the Israelites’ exodus from Egypt. When the Jews fled from Pharaoh in order to escape slavery, they didn’t have time to wait for their bread to rise so they ate unleavened bread. During the holiday, which begins on April 18, many Jews take up wheat-free and yeast-free diets to commemorate the exodus. Passover represents more than half of annual Kosher food sales worldwide, according to Kedem, a New Jersey-based Kosher food manufacturer.

Each year, the Kosher food industry releases new products in time for the Kosher-for-Passover food rush, and this year there’s a proliferation of gluten-free and organic items.

“It’s a segment within a segment,” says Roy Wolf, vice president of Matzot Aviv, a matzah manufacturer based in Israel.

Matzot Aviv first started making organic matzah in 1997, but Wolf says the timing was premature. They sold these organic matzot in a few small shops in the United States and in Israel, but stopped because of a lack of demand. A few years ago the company successfully brought its organic matzah back. In time for this year’s Passover season, the company has launched a new line of organic matzah products including matzah farfel, matzah meal and cake meal.

Creating organic matzah costs more and takes more time, Wolf says. The USDA must inspect the product during several stages of production. But, Wolf says it’s worth it, and the demand for organic Kosher-for-Passover products increases every year.

Still, the Passover food industry is tapping into the gluten-free food market, which is set to grow by $1.2 billion throughout the next five years, according to research by Datamonitor.

Still, the Passover food industry is tapping into the gluten-free food market, which is set to grow by $1.2 billion throughout the next five years, according to research by Datamonitor.

Kedem has launched a new line of gluten-free Passover foods including cake, cookie and frosting mixes in addition to a line of cereals. Yehuda Matzah, the biggest matzah producer in Israel, which distributes matzot to 30 countries world-wide is producing a gluten-free matzah this year. “We feel there’s a market of people with celiac disease who need it,” says Yehuda Export Manager Michael Kandel, even though he’s quick to point out that gluten-free matzah should not be used during the seder, the ritual Passover meal. Truly kosher-for-Passover matzah must include flour, which people with gluten-free diets cannot eat.

Nicole Smith, a 27-year-old who lives in the Northern Chicago suburb of Glencoe, Ill., discovered her wheat allergy about six years ago. She says avoiding matzah during Passover isn’t that difficult. The challenge lies in avoiding traditional foods like matzah ball soup and kugel. It’s like telling your family you’re on a diet during Thanksgiving.