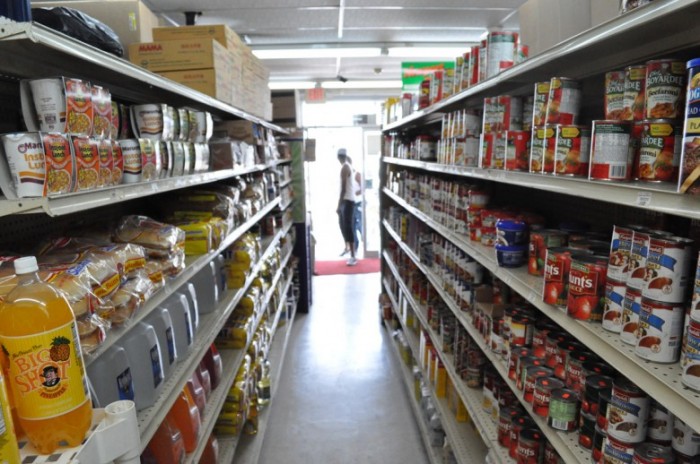 Both live in a so-called food desert. The term describes neighborhoods where fresh produce or healthy food choices are more than a mile from residents. These neighborhoods are usually saturated with convenience stores, liquor marts and fast-food restaurants that mainly carry processed food.

Researchers have said the lack of vegetables, dairy and other fresh foods in neighborhood stores contributes to a poor diet, obesity and diet-related diseases. Louisiana ranks fifth in the nation for the percentage of obese residents and has the highest rate in the country of deaths from diabetes.

In New Orleans there are about 30 supermarkets for nearly 350,000 residents. The locations are often more than a mile from where low-income people live.

In March, Mayor Mitch Landrieu of New Orleans announced a $14 million Fresh Food Retail Initiative to give financial incentives to grocers who set up supermarkets in neighborhoods where there are none.

“Healthy food creates more jobs and more foot traffic, which help local businesses. It increases the home values of neighborhoods,” said Carolina Valencia, director of research at SocialCompact, which conducted a study of supermarket needs in New Orleans at the request of a local merchants’ association.

The grocery store initiative is modeled after a similar program in Pennsylvania, which was the first in the nation to offer low-interest and forgivable loans to business owners who open a supermarket in food desert neighborhoods. The $120 million public-private initiative has created or renovated 88 new grocery stores in 34 parishes. It was also praised by first lady Michelle Obama as a model that could be replicated nationwide. Some states have already started doing that.

David Livingston, a supermarket analyst with DJL Research in Wisconsin, said that New Orleans is “a very understored market.” After Hurricane Katrina, “more people returned than the number of supermarkets.”

He said that the city’s two Winn-Dixie supermarkets were “doing very well.” As a result, he said, he thought more supermarkets would be drawn to the city.

In the absence of a local supermarket, Frommeyer, a petite woman who gets around on a bicycle, shops at the nearby Super Ten convenience store on St. Claude Avenue at least three times a week. It sells everything from women’s underwear and cleaning supplies to plastic containers and gardening tools. The two food aisles carry a limited supply of canned food, breakfast cereals and boxed sweets.

“I don’t have time to go out to four or five stores to get what I need” to make a meal, she said. “I buy what’s available.”

Frommeyer said her diet was healthier when she lived in a neighborhood that had a grocery store.

Asked when she last shopped for produce and other groceries for the entire week, she blinked. Her eyes fixed on the horizon, she did not reply immediately.

“I can’t even remember the last time I went shopping for …” she began, without finishing the sentence.

“Oh, yeah, I remember,” she finally said. “When a friend of mine came and we went to Walmart. We spent almost $300 because that’s the only way I can get everything at one time. I ate like a queen.”

Researchers say not having a full-service grocery store in neighborhoods ultimately costs those areas millions of dollars in “grocery leakage.” That’s the money people like Richardson spend outside his community for food.

The SocialCompact study was commissioned by O.C. Haley Boulevard Merchants and Business Association to look at the grocery gap, particularly in low-income neighborhoods. The study estimated that New Orleanians spend nearly $915 million on grocery purchases, about $383 million spent by residents outside their own neighborhoods.

Piacun, director of Tulane University’s Dietetic Internship, pointed to the school lunch program as an example. Public schools that serve breakfast and lunch to students are required to offer a nutritious meal that includes fruits and vegetables. Once the students take the food tray to their tables, it’s up to them what they eat.

“Kids may leave half of it in their tray and just eat what they want,” she said. Eating habits, she mentioned, are formed at home.

She also said some parents don’t have the time to cook every day.

“They may have access to grocery stores with fresh vegetables, but it’s easier to pick up a hamburger at McDonald’s,” she said.

She continued, “Some people have no money and grandma is cooking something good because it’s important.”

For Richardson, who is on Social Security and was told by his doctor to eat a low-sodium diet, finding local produce is important to stay healthy.

“They may have access to grocery stores with fresh vegetables, but it’s easier to pick up a hamburger at McDonald’s.”

“When you turn 60, you have to change your diet,” Richardson said, helping a neighbor select breakfast cereal at a local convenience store. “I can’t buy here.”

In New Orleans East, two convenience stores, including one that’s a gas station, offer a small selection of fresh fruits and vegetables. Both have full-service meat counters. While the prices are typically higher than at supermarkets, they have become the “go-to” for locals for meats, milk, cereal and other staples. The stores also accept Women, Infants, and Children, or WIC, vouchers.

“What we sell the most is pork chops, chicken wings and whole chickens,” said Marvin Roney Oviedo, a butcher at East Over Market on Bullard Avenue. He said he orders meat for the convenience store twice a week.

An owner of the gas station, Zuhdi Ayyad, 44, who lives in the neighborhood, said he wants a supermarket to come to the neighborhood despite the competition it would create.

“If you bring a supermarket, some are still going to come to me,” he said. “When I first opened after Katrina, no one came back.”

The gas station, Family Ranch Market on Hayne Boulevard, looks more like a liquor store than a ranch. It has a large meat counter with ground beef, turkey necks, cold cuts and other meats neatly displayed. A small display of yellow apples, oranges, limes and tomatoes are near the front.

Ayyad said he is aware that he can’t offer the discounts and lower prices that larger grocery stores can because supermarkets order food by the pallets, something he can’t do.

Still, he said, a grocery store would attract more people to the area. He said his business was better before Katrina, when a Walmart was in the neighborhood.

In Marigny, a new food cooperative is scheduled to open only blocks from Richardson’s apartment in late June or July.

Lori Burge, general manager of the New Orleans Food Cooperative, said the organization has been trying to open a grocery store since even before Hurricane Katrina.

She said the co-op is applying for the New Orleans Food Retail Initiative and needs to get $550,000 more for the $1.7 million project. She said the store would offer fresh fruits and vegetables, vitamins, toiletries, and detergent. A salad bar and a self-serve deli are also planned.

“We chose the location, particularly, in an area where there’s a severe lack of food and grocery stores,” Burge said.

Lead Photo: The aisles of Family Ranch Market in New Orleans East provide at least some healthy food options, unlike some convenient stores that have capitalized on the lack of supermarkets in the city. Quamé A. Hamlin/NYT Institute