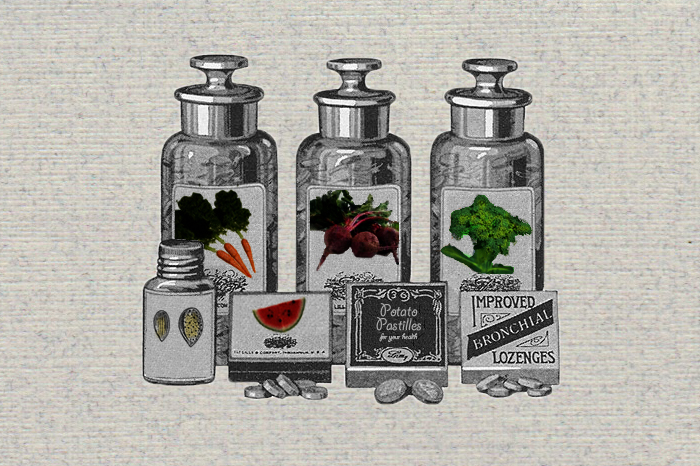 If the doctor ordered you to eat one additional serving of fruits and vegetables each day as a way to improve your health, would you do it? Recently a group of pediatricians, trying to get young children to swap unhealthy foods like fries and burgers for eggplant dishes and quinoa salads, began to take a new approach: they’re giving children a prescription for daily vegetables.

“I usually come up with plans with patients where we talk about what changes they can make,” said Danielle Nguyen, one of the pediatricians at Highland Hospital in Oaklandwho prescribes vegetables. “Things like drinking water instead of soda or juice and eating more fruits and vegetables.”

The fresh produce prescriptions are part of a six-month study at Highland Hospital where pediatricians “prescribe” produce such as organic collard greens, chard, potatoes, strawberries and oranges to 20 children who have been identified as obese or at risk of becoming obese.

In the United States, childhood obesity rates have nearly tripled since the 1980s, according to the Centers for Disease Control and Prevention. About 17 percent of children and adolescents between the ages of two and 19 are now obese. For Latino and black youths, those numbers are even higher.

While nutritionists and dietitians have always urged people to eat a balanced meal that includes vegetables and fruits, the “vegetable prescription” is catching on with hospitals and health clinics across the country. Such prescriptions, allow doctors to make eating vegetables seem more like a required directive and less like a suggestion.

Erica Daniela Lopez is a patient in the veggie prescription program. Nearly every day, the 12-year-old eats a bag of Takis, tiny corn chips rolled up like deep-fried Mexican taquitos. A 4-ounce bag of the red-colored chips has about 560 calories and nearly 76 percent of the recommended daily intake of salt.

Worried about the effects of such snack foods on the young woman’s health, Lopez’s doctors at Highland Hospital have enrolled her in an experimental program to combat childhood obesity. To achieve that goal, the hospital gives Lopez and her family a “grub box” every week filled with locally harvested fruits and vegetables. The hospital also requires Lopez and her family to attend classes on how to prepare and cook vegetables.

Some health professionals believe the medical directive will make a difference on people’s waistlines.

“If they actually wrote a prescription that said ‘I want you to eat two cups of veggies a day, two cups of fruit a day,’ and really encourage the patient to do that in repeat follow-up visits, I think it could have a tremendous impact,” said Jeannie Gazzaniga-Moloo, a spokeswoman for the American Dietetic Association.

Physicians in Santa Rosa, Calif., Holyoke, Mass., and Skowhegan, Maine, are prescribing leafy greens, grapefruits, chard, artichokes, squash, eggplant and other produce to patients with high blood pressure, diabetes, and high cholesterol. Some clinics provide patients with coupons, vouchers or tokens to get their “prescriptions” at farmers’ markets. 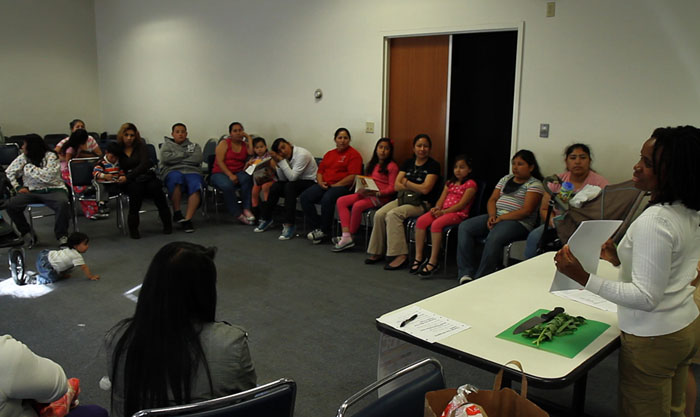 A nutritionist teaches parents how to cut and cook kale at a recent workshop at Highland Hospital in Oakland. About 20 children, most of them Latino, have been put on vegetable prescriptions. THE RATION/ Thomas Gorman

A county health clinic in Michigan was the first in the U.S. to prescribe produce in 2008.Jenna Bacolor, who runs the Prescription for Health program at the Washtenaw County Public Health Department, said they began with a small group of low-income residents in a racially-mixed community in southeast Michigan. As part of the veggie prescription program, residents received tokens to buy produce at farmers’ markets, which increased participants’ produce purchases by some 21 percent after one year.

Earlier this year, the program received a $294,000 grant from the Kresge Foundation to expand the vegetable prescription program to include 400 participants and two dietitians who will help participants shop for produce at farmers’ markets.

“We’ll host cooking demos for the clinics that patients can be part of if they want to,” said Bacolor.

While the Michigan program was the first in the U.S., some doctors in England began prescribing vegetables to patients with cancer and coronary heart disease in 2005. The vegetable prescription model has quickly caught on with government agencies and non-profit organizations trying to turn the tide against rising obesity levels.

The vegetable prescription model has quickly caught on with government agencies and non-profit organizations trying to turn the tide against rising obesity levels.

In the first six months of 2011, the non-profit Wholesome Wave has spent $200,000 on its Fruit and Veggie Prescription Program. At least 250 people have participated in the prescription program since it started last year. The prescriptions are typically paired with exercise, nutrition and cooking classes.

“There isn’t one program that is going to solve the entire dilemma of the diabetes crisis,” said Juliette Storch, the chief operating officer at Wholesome Wave. For veggie prescription programs to work there must be “interaction and constant communication between the participants and the clinic. It’s not enough to write a prescription and say, ‘go exercise,’” she said.

Michele Bunker-Alberts, a nurse at Highland Hospital who was responsible for starting the program there, said it was easy to get support from the hospital’s pediatricians, many of whom are concerned about the increasing number of obese or borderline-obese patients. The hospital provided the initial funds to start the program.

“We have a triple impact,” Storch said. “We help the underserved have healthy foods and vegetables, and help local farmers. It keeps money within the community.”

Sandra Guerra, 38, is a stay-at-home mom with three children. Two of them, Lesly, 12, and Jorge 17, are being prescribed vegetables at Highland Hospital. The Mexican immigrant began fixing her traditional dishes with more vegetables when her children’s pediatrician told her that her son was at risk of developing diabetes because of his weight and family history.

As for Erica Lopez, the Takis-eating 12-year-old, she still feels the pull of those fiery red corn chips covered in dehydrated lime juice and spicy chili powder. Still, she recognizes that her vegetable prescription does get her eating more greens and fewer fat-packed snacks. “It’s going to help me not be sick,” Erica said. “I think it’s worth it right now, even though sometimes I get bored.”