Parole the sick to save the budget? 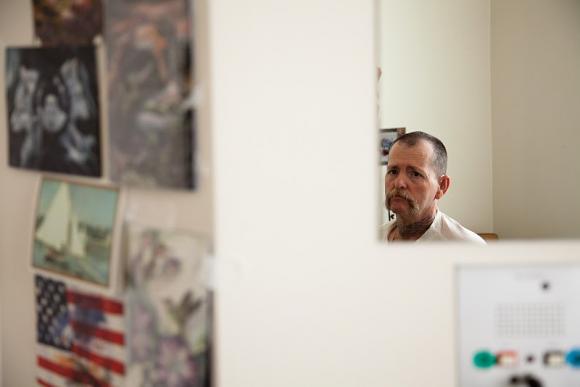 Inmates in California’s state prisons who are gravely ill can run up medical bills that cost the state anywhere from $100,000 to $2.5 million each. More than thirty other states have provisions in place for releasing sick inmates who aren’t considered a threat onto parole, and massive budget deficits here in our state have some Sacramento legislators advocating a medical parole bill of our own.

Reporter Isabella Cota has this story.

ISABELLA COTA: Fifty-year-old Kerry Jackson sits in his wheelchair most of the day, unable to stand without assistance from a nurse. His guitar lays on his bed even though he can’t play it.

KERRY JACKSON: I had a stroke, a heart attack. I got hit by a truck. I used to haul hay for a living, and I had a head-on collision, so I broke almost all my bones and a lot of head trauma. I had multiple compound fractures. I forget a lot of stuff and my doctor remembers it for me.

Jackson is a convicted murderer serving a life sentence in the California Medical Facility in Vacaville. He needs constant care and attention in the state’s leading prison hospital.

JACKSON: I got nothing bad to say here, this is the best place I’ve been for medical.

California’s prison system has thousands of inmates like Jackson. Despite being incapacitated, they are guarded at all times. They either serve their sentences in prison hospitals like this one, or else are immobilized in a bed and guarded in a civilian hospital outside prison walls. The federally appointed receiver who oversees the state’s prison health care says these sick inmates are the most expensive prisoners in the system.

With that price tag in mind, State Senator Mark Leno has drafted a bill that would grant California’s 32 sickest inmates medical parole. The inmates would not be sent home, but would be paroled to a care facility with tight restrictions and could return to prison.

At the moment, there’s no way to parole sick inmates from the system before they’ve served their terms.

MARK LENO:  In many cases these individuals are actually comatose, and we’re spending extraordinary amounts of money that we don’t really have right now, not only on their expensive medical care but because they are currently outside of the prison system and not on parole we have to place an armed guard 24-7 at their bedside and another armed guard at the door of their hospital room. This medical security represents 32 percent of all overtime costs for our prison guards and that comes to about a $136 million annually.

Leno says paroling just 32 of those prisoners could save the state up to $40 million a year. Once paroled, the federal government would be responsible for paying half their medical bills.

However, to some, Leno’s proposal does not go far enough. David Warren is a spokesman for the advocacy organization Taxpayers for Improving Public Safety.

DAVID WARREN: We oppose the bill not because we’re in opposition to paroling individuals who are extremely ill or terminally ill but rather because the manner in which the bill is drafted provides that, at best at this time, out of the approximately 168,000 inmates in state prisons and of the 3,000 extraordinarily ill inmates, only 32 of those inmates would be eligible for medical parole. These are individuals that are so sick that they require constant care. These are individuals that if they ran away from their environment would die almost immediately. They’re not a threat to public safety because they can’t go anywhere.

Other opponents, like advocacy group Crime Victims United, say medical parole is not a good idea at all. Harriet Salarno is the group’s leader. Her daughter was murdered in 1979.Shesays the financial benefits do not outweigh the social injustice made by granting sick inmates parole.

HARRIET SALARNO: It is sad that for budget reasons, that we are playing games with public safety. This is unfair to reduce the sentencing, it’s unfair to the victims who had to go through the court procedure feeling that the person that destroyed their families, that now they’re going to be released and be functional? First of all, they’re not rehabilitated, what guarantee do we have of them returning when they’re just taking medication, that they’re not going to commit another crime?

Today, more than thirty states have a similar medical parole bill and Senator Leno thinks that signing this legislation is a no-brainer.

LENO: Well I think this is a gift for a governor who is swimming in a sea of red ink, who is trying to balance a budget. If the Governor is so interested in seeing that we spend no more than seven percent of our general funds on corrections, here is a program that can help you save at least a portion of that.

The bill already passed in the Senate, and Assemblyman Mark Leno expects it to reach the assembly floor after the summer recess.

In Vacaville, this is Isabella Cota for Crosscurrents.